One of the biggest factors that is keeping people from enjoying a nice weekend out in the wild with their family is the potential threat of wild animals they might encounter. Let’s face it, even if you’ve gathered some basic survival skills, like how to light a fire and so on, it’s highly likely that you don’t know much about protecting yourself from wildlife whilst out camping.

Well, the good news for you is that, with this article, we’ll try to bring you just a little bit closer to that knowledge by offering some basic prevention and protection tips for you and your loved ones.

1. Prevention lies in the location of your campsite.

Before you head out camping, consider the various possibilities for pitching your tent, and the threats they might pose to your security. For example, woodland areas are not only a favorite home for mosquitoes and other pesky insects but also house snakes, raccoons, and even bears. A campsite that is near open water is again dangerous as it may house all of these creatures, also, since it provides an obvious hydration source.

What you should look for is an area that is open and on flat earth, with little to no grass (as this will deter snakes and other critters). You’ll want an area where there are trees (so you can hang your trash bags and other potential wildlife attractions), but not an area that might make an animal feel trapped with you – this will cause them to become aggressive.

Lastly, when choosing your ideal camping site, try to go for a surface that is on higher ground, so that in case there is rain, you’ll be able to avoid excessive moisture, which often attracts wild animals.

The number one reason wild animals come to human campsites and properties in general is, of course, the search for food. The easily available food source plays such a huge factor in attracting wildlife, not only in the great outdoors but also to our homes. Because of this, Don Hudson, the owner of Wildlife X Team Fort Worth, says that it is common for wildlife to get into your home as well. So in order to deter them from approaching, you want to minimize any possible attraction points, just like you would do to protect your home from an infestation.

3.  Keep artificial scents at a minimum.

Animals are attracted to smells they find odd or foreign, so this might be bad news for you if you’re planning on packing lotions, deodorant, soaps, etc. It’s not that the wild animal will necessarily be attracted, but rather curious, and come see what’s up with that scent, so try to avoid the use of such products while on the campsite.

4. Keep your tent in mint condition.

It might seem like a no-brainer, but making sure your tent and camping equipment are free of tears and holes can really make a difference, especially in protecting you from smaller creatures like rodents, opossums, etc.

Also, you want to make sure the zippers are working properly and that you can really “shut the door” in case of a snake or something like that coming your way.

Sure, this might not be good manners if you’re on a dedicated camping site with other people camping nearby (in which case, maybe give this one a miss). However, if you’re camping on your own out in the wild, remember that most animals are deterred from approaching if they hear loud clapping, banging, or other such noises. It scares them, so making noise around your campsite may well signal to a potential predator you should not be messed with.

6. Have some bear spray on you.

Hopefully, you won’t get to use it, but it’s better to be safe than sorry. On the other hand, if you do encounter a bear, please stay calm. Do not begin swinging a bat or something toward the animal, that’s sure to engage its fighting skills, and yes, bears have way better fighting skills than we do.

So stay calm. If possible, try to scare it off with loud noises.

If that doesn’t work, you need to stand your ground and make yourself appear big (perhaps by holding a backpack or something like it above your head). Do not in any situation attempt to run away. Bears are fast runners and will catch up to you in an instant. And it’s likely they won’t be pleased.

Remember, most wild animals choose to avoid unnecessary conflict whenever possible. So you want to minimize aggressive behavior as much as possible.

7. However, know when to fight back.

While attacks are fairly rare, a wild animal attacking you is super bad news because it’s likely it has rabies or another such disease that makes it lose its natural fear of humans. This is often the case for foxes all across America so it is important to know the signs of a sick or rabid fox. You can learn more about foxes here.

Rabid foxes have been known to bite and claw their way through a tent, so if you’re under attack from an animal who doesn’t look scared of you, be prepared to use your fists and feet to fight it off you. If you have suffered such an attack, don’t assume you’re safe if the animal scampered off. They will return and try to catch you unaware, so it’s best you pack up and get away as swiftly as possible. 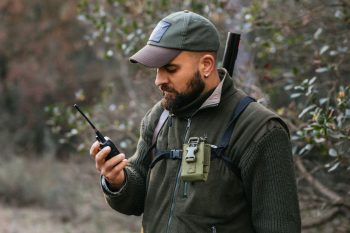