Squirrels are active in most parts of the day. They are just all around you. They can be in the burrows, on trees, on mast crops scouting acorns, or anywhere in the stack.  Basically, you can stroll through the daylight and nightlight hours with still a day of productive squirrel hunt.

Hence, if you are up for your first ever squirrel hunting, you have landed in the right reading. Going to your hunting zone requires a lot of preparation. The first thing on the list is choosing the appropriate gun. To guide you, below are the 5 Best 22 Rifles for your Squirrel Hunting: Since 1964, this neat semi-automatic Ruger 10/22 has been known as an American icon. Its popularity never changes even for more than 50 years of its existence. It is primarily because this model is well-made, reliable, and can be easily maintained. It is made of handful of parts and tools that are readily available in the market. In this case, the replacement of any part that you wish to customize will never be a hard task.

Further, the 10/22 goes with a 10 rounds rotary magazine that sticks neatly in the device during an action. It is also made up with aftermarket box, drum magazines, and a coffin with capacities of 25 to 110 rounds. For hunting, the standard drum can already work given that you also need to keep the weight down. With its 25-round magazine make it very fun to use in shooting.

Overall, the Ruger 10/22 with a mounted scope on it is noted as one of the 22 LR Rifles which can blast a squirrel a hundred yards away. This skill of the device is really remarkable for the past 50 years. At the same time, its light and durable features make it able to be used for long years to come. Over the past years, the KIDD Sporter Rifle has been developed to outperform all other .22 hunting rifles present in the market. Indeed, its ambition has brought it to the top. It has a black ambidextrous design that you can easily pull off both in your right and left hands. It also contains multiple sling options with its accessories like the light mounts, rails, bipod mounts, foregrips, and a lot more.

Further, this rifle is made out of lightweight steel fluted barrel of 16.75 inches and weighs 1.25 pounds. The said fluted barrel contains a stainless breech which anchors the barrel to offer support. The best part? Each of these rifles is hand lapped in factories to eliminate any inconsistencies in the barrel. In effect, the rifle shoots with increased accuracy.

The trigger is also considered as its strongest point. It is because of its capability for a quick response action as you pull it. Although one of the most expensive .22 LR rifles on the list, the KIDD .22LR Classic Ultra Lightweight Sporter Rifle is still considered as one of the best choices, especially for entry levels. 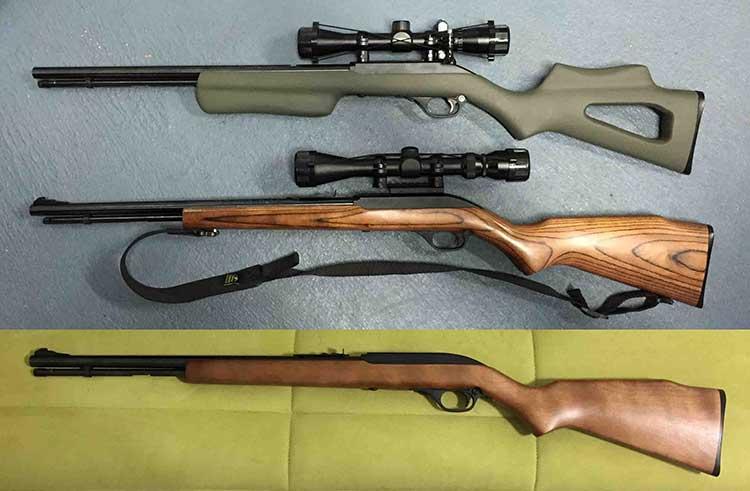 The Marlin Model 60 has been making their fame for almost 50 years now. This is primarily because the Model 60 is one of the Marlin models that are inexpensive, but extremely reliable. It is simple, yet robust and accurate. True enough, this device can be the ideal weapon for small game as well as hunting squirrels in the woods.

This semi-automatic rifle is also fed from a 15-round tubular magazine under the barrel. It has a magazine tube that can hold more than enough ammunition for hunting purposes. The great advantage of this is that constant reloading will not be needed every time you are up for a game or pest control. Also, its tube is a brass that is proven corrosion resistant.

Another impressive feature of this model is its excellent barrel which contains 16-groove micro rifling and a high-quality crown. This makes the device very accurate during hunting which hits the target the cleanest possible way. Typically, the Marlin Model 60 is also used in small games due to its affordable price. Hence, if you are up for the hunting expedition, this model can be one of your practical choices. 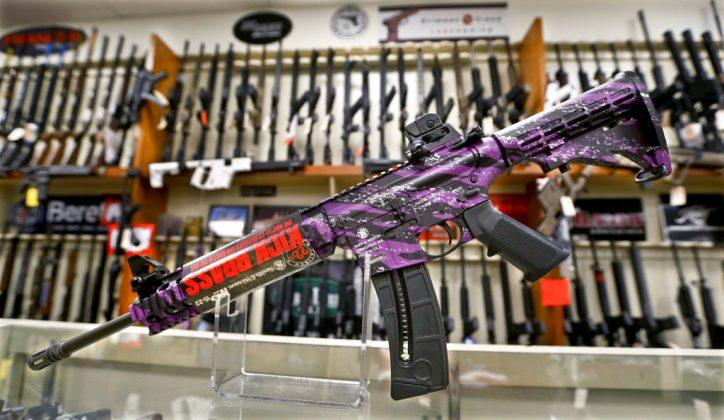 This semi-automatic rifle is a true M&P 15-22 rifle that was built with style. It features a 10 inches slim handguard and another 6 position telescoping stocks. At the same time, it contains a 2 inches rail panel that is used for customization options. The stocks and grips of this rifle are interchangeable allowing you to customize it based on your needs. All of its controls function well making the weapon’s manipulation drills extremely realistic.

The gun itself also features a carbon steel barrel that is integral in making it durable. Its rear sight is also a dual aperture that gives you an accurate shoot during hunting. As it contains a proven operating system, this rifle has been reviewed as one of the most reliable rifles to be recommended.

Generally, its price is just right for its functions. Aside from being the campers’ favorite rifle, small game and squirrel hunters can take benefit from this rifle. Its proven ergonomics and reliability are the top reasons why. Hence, if you are looking for a rifle especially with a total function AR type 22lr, we would say Smith & Wesson M&P 15-22 can be a great deal for you.

For a small game hunting, the Savage Mark II F Bolt-Action Rimfire Rifle can be the ideal device for you. This is because the same is proven and tested in target shooting, plinking, as well as small game hunting. Further, this product comes with open front and rear sights that provide more accuracy when shooting a target.

A lever is also mounted within the trigger to assure your safe experience with your rifle. This is because the lever serves as a blocker in case of an unintentional light press in the trigger. Further, the bolt features dual extractors for extraction of known spent cases. A 10-round detachable magazine similarly allows for easy and quick loading of the firearm. Generally, the overall convenience that this firearm can provide is worth the price.

With its durability, spending a day with the Savage Mark II F Bolt-Action Rimfire Rifle for squirrel hunting or marksmanship practice can be enjoyable. This is primarily because all the needed features of a rifle are all packed in one. The best part? All its synthetic stocks are resistant to different kinds of weather.

Why 22 Rifle is the Best Option

When you are starting out with squirrel hunting, a .22 LR can really be the best option. This is primarily because this model can be an ideal firearm to learn from before you move to a bigger one. Aside from it is light, its operation is manageable and its parts and ammunition is so cheap. There are so many legendary .22LR Rifles aside from the ones mentioned above. Further, this rimfire is a highly versatile caliber that definitely works well in hunting small game and pest control. Further, its second advantage is that this .22LR uses .22LR ammunition. This ammunition can be your best and cheapest option along with the firearm. It is way cheaper and more capable of taking longer range than the shotgun shells. Apart from this, the .22 ammunition produces quiet sounds in the hunting area which prevents disturbance to other squirrels.

With the use of this ammo, you can directly go through a squirrel’s headshot and yield the rest of the body’s meat. Typically, this ammunition can travel up to one and a half miles. But, shooting squirrels in a far distance can also be challenging as it also contains safety risks.

Spotting Squirrels with Your Hunting Rifle

Aside from the importance of picking the best rifle, spotting squirrels with it is also the key for your successful hunting expedition. You cannot just bring a toolset, but also a skill set. With that said, here are the most important reminders you have to know before you begin:

Picking the right place where the squirrel usually stays is the first step. Start by searching places like trees, foliage, burrows, crops, or any place where they usually live. After that, primed your gun and position it in the place where you can easily see the squirrel targets. But, there are a few unusual tips that you can do to look for them. This is by hearing the squirrels’ sounds rather than visually spotting them.

Listen to them as they move through the leaves when hiding. They can also create sounds of hulling, scrapping, and cutting whenever they nibble at acorns and nuts. To make it easier for you, just find something similar to raindrops.

Squirrels also make noises as they climb trees. You can sense that they are there when you start to hear the sound of rustling tree bark or sections of the bark falling. When you finally hear sounds similar to squirrels, check the colors of their coats. While most squirrels have brown coats, you may also see others that have gray, red, or white. Some squirrels even have shiny black coats. The deal here is to first check if it is really a squirrel you are going to shoot. After that, aim your rifle directly to it for a quick kill.

When shooting a squirrel, the best place to aim your gun is in the head area. This is because hitting the brain alongside, ensures that the squirrel will die instantly. Aside from it lessens the squirrel’s suffering, it also preserves its fur and meat freshly.

For instance that the head is too difficult to aim, targeting the heart instead can be a great alternative. The heart of a squirrel is located near the upper body and not too far from the neck. Shooting the body of the squirrel, like a deer – is not something favorable if you want to keep the meat edible and intact.

Look out for the squirrel carefully when aiming. If it is now still, shoot it either in the head or in the heart. This is because shooting the squirrel while moving can give you a an unclean shot. You either leave the squirrel wounded and not catch it, or you can kill it with all the body meat smashed. Overall, you will end up with poor quality meat.

Other Safety Points You Have to Remember

Before you go out for squirrel hunting, make sure that you are equipped with safety rules for hunters. Some are simply common sense, while others may be unfamiliar. Here are some of them:

Anyone of the 5 rifles featured will make your next hunting expedition more enjoyable and productive. Choosing the right one only depends on your price point. But, if you are looking for the absolute best .22LR rifle for your budget, going to the Ruger 10/22 is definitely a good deal. This model basically beats every feature in just about every category.

Hence, for our best option, the Ruger 10/22 seems to be the most favorable. For the past 50 years, this has already been noted as one of the 22 LR Rifles which can blast a squirrel a hundred yards away. This skill of the device is really remarkable for the past 50 years. At the same time, its light and durable features make it able to be used for long years to come.

The bottom line: whatever you choose, the best takeaway we have in writing this guide is to be patient. Squirrels are a bit active and energetic, so they move around a lot. They are fast and hardly ever stand still at certain times of the day. Wait carefully and aim for safety.