Deer have different mindset to the wind depending upon the region in which they live. And, why not? They are made by nature to evolve in the habitat around them.

While deer hunting in the wind, you should note that thermals and wind directions constitute a major percentage in determining movements of mature bucks, especially. Yes, they move in winds with their noses. So, to be scent free is one of the important aspect to be considered. In winds, make up your minds like that of a deer and point out the necessary details provided in this article. 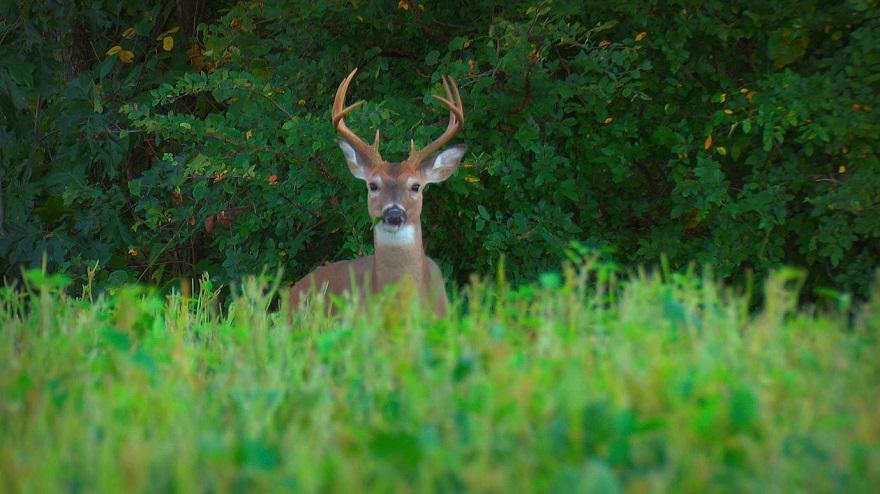 According to a research done by Pennsylvania State University independent student, it was surprisingly found that all deer (both bucks and doe) moved more during windy days but less on windy nights.

It is possible that you may not see them because they are moving in a different way or other directions. But, strong winds do not stop them from moving at all. Yet, calm winds make deer movements come to a halt.

There is a direction of blowing wind. Right?

As I said, deer move but in different directions. They are wise enough to use the winds to their lead and so as you are by using certain wind logics applied to determine the direction of a deer. Like, winds will give you an indication that bucks will move surely to a less pressured area somewhere in a downwind direction. Deer also use wind tactics while choosing their bedding area. But, while coming out of their bedding area, they pay less attention to winds which is a positive signal for you hunters.

The other notable advantage is that the sound of the wind is going to help mask your sounds too. So, you can act as a more aggressive hunter on a windy day as you got a cover. On a hunting day, when there is no wind at all, the situation may be like very disappointing sometimes. Whenever you kicked a rock or stepped up forward, they just got alert by hearing even little sounds. So, by now the most significant advantage of windy weather is its incredible masking.

A rising barometer that shows wind changes from east to west direction (clockwise) is the best time to hunt. Stronger winds will show rising barometric pressure. The best wind direction also depends on your hunting areas, bedding areas concerning food sources, thermals, terrain, etc. But, in general, a good deer movement is noticed in the northwest to the northeast wind as it will bring cooler temperatures and higher barometer.

So, be positive and go on hunting regardless of windy weather.
Let us get into some data about how winds can have an impact on the deer movements.

According to a study conducted by Texas Tech University Professor Steve Demarais and Bob Zaiglin, a wildlife manager, it was analyzed that how diverse wind speeds influenced buck movements. They classified the winds starting at 0 mph, to 20 mph and higher. What they found was that deer’s movement is more in light winds and got reduced dramatically when wind speed reaches 15-19 mph. And, when wind was below 20 mph, deer activity increased compared to when the wind was still. So, their study showed that deer hunting could be best on both calm and windy days (at least in South Texas).

Mississippi State University Dr Stephen Webb and his colleagues had also done multi-year research on white-tail movements. It is one of the first studies to use GPS technology to track deer movements. They positioned GPS tracking collars on 15 male and 17 female deer existing in 2999 acre spread of Samuel Roberts Noble Foundation Wildlife Unit, in southern Oklahoma. Their results showed no apparent trends in the consequences of weather, together with wind speed, on either sex throughout the research.

Webb said, Wind was just inconsistent, which had least effect on movements of deer.

Dr Duane Diefenbach, professor at Wildlife Ecology for the Pennsylvania Cooperative Fish and Wildlife Research Unit at Penn State University said, “A little bit of wind to moves the deer, but it was habitually warmer on quiet days, so we can’t be convinced that wind speed is behind the distances deer travelled.”

All studies have their restraints that must be kept in mind while construing their results. It does not mean that deer located in southern Oklahoma will act the same way as the deer in southern Ohio.

While some controversial studies show that deer movements become less during windy days, it does not mean that the deer are not moving at all. Though they are moving at lesser speeds, still, their movement can be seen.

So, rather than sitting on a couch and eating potatoes, it’s better to go on deer hunting in the wind.

Do you know that a deer can be easily hunted when under pressure? In high windy conditions, their caloric output and stress levels dramatically rise when they move during windy periods. Well, they are wise enough to minimize their stress levels by changing their locations.

This is how wind can affect deer movements.

So, you should look for them at those areas where you will probably find them like areas shielded from high winds. For that, bedding sites are one of the ideal locations.

Deer suffers from their reduced ability to detect incoming predators during high winds. Thus, you can follow deer hunting tips given below.

You need to have a clear understanding of how the mind of a deer would work in windy conditions. As I said, they become little wary. So, they tend to move to areas that cause them less tension. This is how their mind works while dealing with a stressful situation. You can also think of other aspects like their feeding locations or the areas where they can bed and feed without parading itself to the wind.

On this note, you should respond to wind gusts as the deer would. Only then, they will be tricked into your line of sight.

The most common and the hunter's favourite place to hunt deer during extremely windy conditions is to hunt on the lee side of a ridge system. Less windy areas can also be found on a flat conifer swamp, lee side of a woodlot or an expensive native grass field.

Do not wait for deer moving past your tree. Instead, get on the grounds where high winds will cover your sounds as well as your movements.

The blowing wind direction tells us to set up basically on the downwind side of the direction that deer would go. This is fine until we observe the fact that an adult deer uses the precise logic to stay alive. Thus, hunting the wind is much more than merely setting up on the downwind side. As a successful hunter, you should understand how to hunt the wind separately in each of the scenarios like their food sources, ridges or bedding areas.

LetHunt the wind in food sources

Food sources are the accurate place to initiate. A grown-up buck is surely going to move toward the source from a downwind position in roughly every circumstance. However, the whitetail is more of an art than a science as no situations are alike.

To hunt efficiently in a food source, it is important to take a keynote of your position. Your position should be downwind not only of the source but also of the travel path of the deer that it will use to come in the field. Being experienced , a full-grown buck hunter knows well the threats of revealing himself during daytime hours. This type of unsafe situation will make him enter the food source only when deer senses that he has wind to his advantage. In this scenario, you can hunt the wind when you are located far enough down-wind from the source for him to move between you and the field.

Hunt The Wind In Bedding Areas

Like food sources, adult bucks will often tour the downside of bedding areas during the groove to look for does along the way. This situation demands you to think like a mature buck. For that, you should think about the travel route he will be using so that the gentle wind travelling through the bedding area strikes him right in the face. Once you find the route, it is high time to choose a tree further downwind and hang your set. Whatever the situation is, shoot within your boundaries and hang your sets in a location to give you those kinds of dreamy shots to kill them instantly.

Hunt The Wind In Ridges

Finally, coming to the ridges. Ridges are great routes for deer and at the same time immense hunting prospects for us. The more elevated you get, the more protected you are with regards to paying attention to both winds as well as thermals in areas with lots of topography. Thus, you should take benefits of these and position yourself for the breeze and thermals to fall off the ridge behind you where lots of deer activity occurs.

Thus, hunt the wind effectively in each situation to harvest more mature bucks.

Deer is good at hearing as well as smelling along with a good range of sightseeing. All of these factors make them wise enough to prevent themselves from hunters to stay alive.

This is why it is advised to go scent free. Though it is not possible to be completely free from the human odour, assure that you are completely odour free.

For that, use aroma free soaps and do not wear any fragrances. Spray the gear for hunting with odour eliminating spray prior to going around the woods. It is also said to put as more as a natural odour of the woods.

✔ Do Not Over-Rely On Stands

No doubt, there is always a probability that a big deer you have been trailing down can approach right beside your tree. But, over relying on stands is not a good state for hunters. If you are noticing a long delay in a deer approaching you, then modifying your stand locations or going in an open field could be the best option.

In hill areas specially, thermals draw impact on your stand locations because of frequent changes in wind directions due to hilly weather. So, here you to change stand locations at regular intervals.

You need to familiarize with the wind patterns every day before going into the woodlands. This should be a consistent process to know every aspect of winds.

Relying on the weather forecast is not suggestive. Rather, you should scout the area before the hunting season and check out how the terrain features present may alter the wind patterns as predicted.

Having a map can increase your chances as you can hunt on a day to day basis with more efficiency. It is advisable to use either digital GPS or a physical aerial map of your hunting grounds. Highlight the areas which are ideal for deer to stay in windy weather especially areas shielded with winds.

Deer hunting in the wind is like a mixture of both art and science. Movements of a deer in windy weather are not so controversial subject now as lots of research has proven that deer still move in winds. I hope the article has well stated that hunting deer in windy conditions is possible because “the wind is your friend”.