Home / Guides & Skills / How to Make a Knife Lanyard

The Knife Lanyard or Diamond knot is a thing of beauty. Whether you’re setting out to hike and go outdoors to explore nature or setting up your favorite tent for camping. A knife lanyard ensures that safety comes first. When laid out flat, and before it is tightened, it resembles a Celtic Knot Symbol.

As always, ensure that you have the right type of knife for your needs. So before going to far ahead, make sure you’ve done your research on the different knife options out there.

Constructing a knife lanyard using the diamond knotting technique is a mix of practical application and decoration. Here’s everything you need to know about knife lanyards and how to make them.

The History of the Knife Lanyard

As has been the case throughout history, metal was a precious commodity and any item crafted from metal was even more valuable. Historically, the place where you would find large quantities of rope and the urgent need not to lose a knife was, of course, on board a sailing vessel.

Sailors had plenty of time on their hands and a basic working knowledge of knot-tying. This was the perfect environment to create useful ways to attach a knife to the clothes, waist, or neck. Over time, the attachments became more elaborate and eye catching. Out of the many varieties of knots used to fasten a knife to one’s clothing or body (crown knots were used in the beginning), the diamond knot became the standard.

No official documents exist that pinpoint the origin of the lanyard. The word “lanyard” can be traced back to the medieval England word, laniard. That word was borrowed from the French word for strap, lanière, which dates back even further.

The lanyard’s origins are firmly entrenched in the maritime world. The lanyard’s practical applications have spread to any outdoor pursuit where losing a knife would be a very bad idea, maybe even a dangerous one. You would struggle to find a ceremonial defense force uniform that doesn’t display a lanyard prominently.

The knotting technique is also used prominently in sports where climbing and rope strengthening and safety is a requirement. 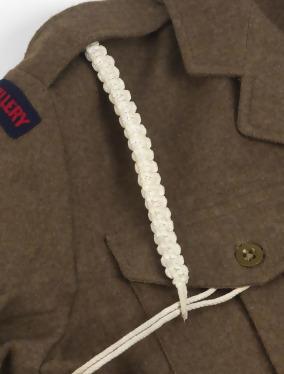 Lanyard Use Today in the 21st Century

The lanyard traveled from the ships to the land over the centuries, and they can now be found in every sector where rope and attachment integrity is important. Are you a cowboy learning how to ride a bronco? One of the skills you will learn is how to cling onto the ride using a lanyard. Are you a construction worker scaling a building? A work positioning or lineman lanyard would be part of your kit.

Lanyards have become part of the sports and outdoors activities landscape. Its use in the recreational and occupational  safety system to prevent injuries and falls is far reaching and impactful. You will also find them used to carry ID cards, USBs, and keys.

Anything attached to the shoulders, belt, wrist, or around the neck with a cord or strap can be loosely defined as a lanyard. If you have a tactical knife or any survival-based item, it will always come with a hole in the handle if it has been well-designed. These have been specifically included into the balance of the knife so that a lanyard can be threaded through or attached.

Keep in mind that lanyards are not only exclusive to knives as there exists many applications of lanyards.

Attaching a lanyard to your knife is a good idea for many reasons when you are outdoors. Besides making it easier to find, if you use your knife regularly you will want to consider these safety measures as well:

Now that you know a bit more about how lanyards evolved, and how useful they are, you are ready to learn how to make a knife lanyard.

Before you begin to learn the knotting technique, you will need to have these items on hand first:

How to Make a Knife Lanyard Step by Step

Thread the paracord through the knife hole after you have cut the cord to the required length. If this is your first time tying a diamond knot, it’s a good idea to poke the cord through a sheet of paper to practice first. 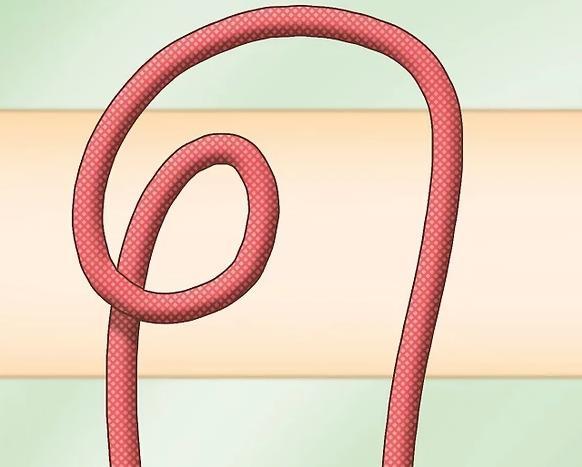 Then slide the RIGHT half of the paracord portion close to the bight under the loop. This is called a Carrick bend, a well-known knot form used throughout the centuries for both decorative and practical applications.

Take the RIGHT end of the paracord. Form a second bight that will arch opposite the first loop. The LEFT half of the newly formed bight should drape over the cord section of the first LEFT loop.

Now, insert the RIGHT tip under the section of the paracord to the RIGHT of the first made loop. Remember that the RIGHT tip would also be the RIGHT half of the second bight before you do this step. You should have both tip ends facing the same direction at this point.

Pull both cord tips with one hand, while firmly holding the first bight in place with your other hand. This is the final step to tightening the knot before beginning the next one. Use the lighter to singe the ends of the paracord so that they don’t fray.

Learning how to make a lanyard is considered a useful skill in many outdoor orientated activities and lifestyles. When you have mastered this basic craft, you can branch out into more decorative knotting techniques.